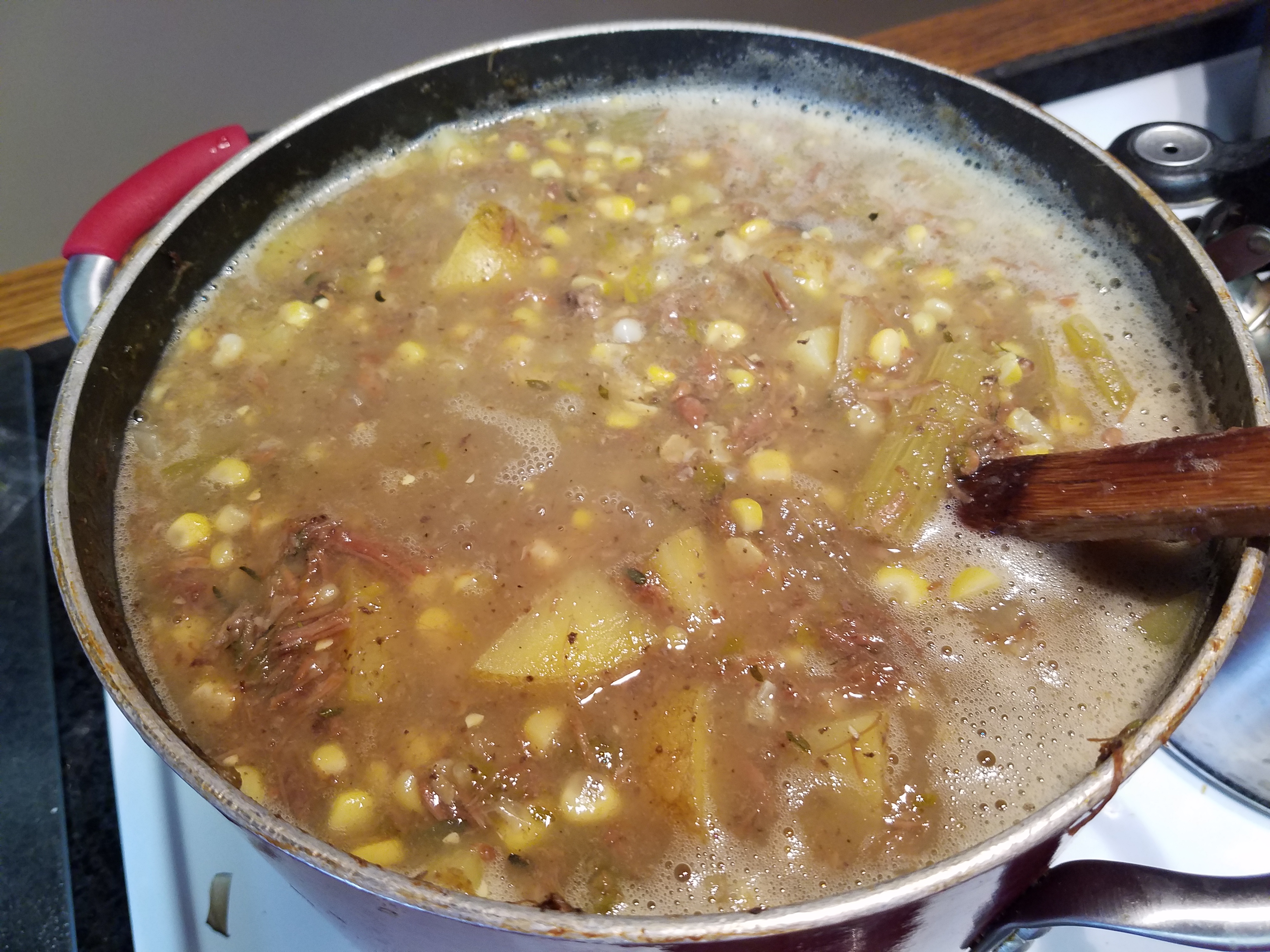 Someone asked me about a recipe for my currently simmering pot of soup, and the real answer is just too long for a Facebook reply.

Soup is a staple in our house, at least once a week, often more.  95% of the time, it is a “from scratch” pot, although we have not been above doctoring a can of soup- especially a tomato soup base.

Good  soup starts with good stock.  Stock takes some amount of time and patience, so I try to make the stock when materials and time are available and then freeze it.  Sometimes I have time to make the stock “soup ready” – pre-loaded with the first batch of veggies, and sometimes it is strictly meat broth cooked down.  Both of these can be useful.  If you have a really big batch of vegie broth stock, you can also freeze that for later quick cooking rounds of soup.  My vegie broth tends to be less frequent ( usually driven by guest diets) and thus cooked fresh to need.  I currently have chicken,( with and without meat bits), duck, beef ( maybe??) and 2 kinds of pork stock in the freezer.   This particular soup was made with a dark pork stock that is very meaty and made from hog neck. Because that particular stock was not soup ready, I thawed out 2 containers yesterday and did round 1 on the soup last night.

Soup is all abut blending flavors and getting the texture you want. I make some soups that are very thin and light— a veggie infused chicken broth for cold recovery, for example. Other stocks are thick and hearty- a stew, really.   Today’s soup is a hearty corn and potato cream soup and I want it to be pretty thick, so it needs body.  From the very start, I add veggies that will assist with this.  Given a lack of time and/or those veggies, I have also been known to thicken up soup on the quick with cornstarch- scratch soup is about what time and materials you have on hand. There is not a right or wrong way to do this.

Two summers ago we had a bumper crop of zucchini. We ate and gifted until people started to duck and hide when they saw us coming 😉  We froze a giant laundry basket full of pints of shredded zucchini.  One day, I stumbled across the idea of dumping a bag ( 2 cups worth) of the frozen shreds into the early stages of the soup cooking. It is awesome and any time I am going to do a long cook, I add in one.  It adds equivalent body as adding celery, and all the nutrients from the zucchini as well.  It cooks down to basically nothing but thickness in the soup– no little green strands or bits.

My preferred soup pot ( the one that feeds us for a few days) is a medium sized pot.  I think it holds a gallon and a half, but it might be two gallons.  When I clean up from this batch of soup, I will measure.  It is OFTEN true that soups grow into needing the larger, taller aluminum stock pot, but for cream soups I limit myself hard.  This is an indulgent soup, I do not need 4 gallons of it around!

So last night, into the stock pot went the following:

the remains of my celery ,chopped up ( it was about 4 stalks, but if I had more, I would have added it… again, I want this to be a nice thick soup)

top the pot off with water to be pretty much full.

The goal here is to cook down this round of vegetables until they are not visible, or are at least just a very translucent soft mass.  This is flavor layering, not soup texture creation.  The exception last night was the corn. This round of corn was to add flavor and thickness ( think corn starch), but I knew it would not go translucent. That is fine. LID OFF for most of the time, once it got going.  I wanted to reduce the contents of the pot down to half. Any time it got to half or below, but the veggies were not done, I just added some more water.

This is a time intensive, but almost no work step of the making. When I have the time, I like to do some stocks to this point and then freeze, which makes it easier to do the last step of the soup on days when I have less time all at once.

I got the soup to the point I wanted before bed last night, and  put it on pause for a few hours of sleep.

This morning I brought it back up to a full boil to get it started, then turned it back own to low.  A little extra water added in and potatoes where chopped and added, along with a half a bag of corn (this time for texture).  I added in some thyme, some white pepper and a little salt.  I add salt gradually to taste over time, it is easy to add more, it is a pain to try to suck it back out if you added too much.  Taste your soup frequently…. just like any cooking adventure.

This was simmer time.  I want to slow cook the potatoes until tender, but not boil so hard they become mash. It was at this point that I had made the original post and this picture.

Honestly, if you were not wanting a cream soup, you could stop here and have a very nice soup.  But it is cold and snowy and my brain was set on a nice cream soup. I did this last simmer with the lid off, so the fluid volume would reduce down just enough to have room in the pot to add dairy.

Once the potatoes are tender, the pot is turned down to very very low and I added cream and some shredded cheese.  I let it have about 15 minutes of simmer and tasted. It was still not the creamy I wanted, so I added a bit more dairy.  It is now on super low simmer, heating the soup back up ( after adding cold dairy) and read for whenever we want to grab a bowl.

What dairy and how much? This depends on your diet needs ( how much you are watching calorie add) as well as thickness state.  Straight milk will water out a very thick soup. Heavy cream will thicken it just a little as it simmers.  You an use this or anything in between, depending on what you have at hand.  How much dairy depends on the broth. A light chicken stock need much less dairy than a heavy dark stock to give the same result.  Taste and add until you are happy…