The biologist in me has been quietly battling for a different perspective on anxiety these last few months, and when Brain Pickings did a feature on Anxiety, it seemed the time to get a little noisier about it.

In the article, Stossel   starts to do a great job explaining that Anxiety can have many origins:

“The truth is that anxiety is at once a function of biology and philosophy, body and mind, instinct and reason, personality and culture. Even as anxiety is experienced at a spiritual and psychological level, it is scientifically measurable at the molecular level and the physiological level. It is produced by nature and it is produced by nurture. It’s a psychological phenomenon and a sociological phenomenon. In computer terms, it’s both a hardware problem (I’m wired badly) and a software problem (I run faulty logic programs that make me think anxious thoughts). The origins of a temperament are many faceted; emotional dispositions that may seem to have a simple, single source — a bad gene, say, or a childhood trauma — may not.”

But although he mentions the hardware problem, it is more focused on the concept of a brain/CNS hardware problem- not a whole body one.  But the truth is, that there are a multitude of folks, many unknowingly, suffering from a whole body problem called Dysautonomia.   In an attempt to simplify a vastly complicated body mis-function, Dyautonomia is the result of the body’s Autonomic Nervous System ( ANS) being out of alignment.  The ANS controls core bodily functions ( digestion, heart beat, breathing, etc.) as well as the Fight or Flight reflex.  The ANS is controlled by hormones that circulate throughout your body in response to feedback signals, as well as feedback from the Central Nervous System ( your thoughts, fears, and dreams).  The fight or flight response is so critical to our survival, that it can also be triggered by the CNS- think scary, anxiety laden thoughts long enough and your body will react- producing the very real fight or flight response.

It is true, that there are some folks with GAD and their anxiety problems are CNS related ( either hardware or software). For those folks, the continued development of therapies and  CNS impacting drug therapies is crucial.  but if your Anxiety is ANS based, those CNS drugs will at best dull or mask your symptoms- in many cases they have no impact, or even worsen the anxiety.  No wonder drug trials get results that are so messy and confusing!

So how does ANS Anxiety work?  This is the kind of anxiety that in a balanced body, saves your life- a growling dog or a man with a gun threaten you, and your body secretes a cocktail of hormones that alerts your brain and prepares your body for a response.   In folks with Dysautonomia, part of their hormones are misaligned or mis-respond, and the brain and body are alerted to threats which do not exist in the real world, but are phantoms of hormonal patterns.  The important distinction here is that with ANS Anxiety the root cause is the chemical soup in your body, which trigger thoughts– NOT the thoughts in your brain triggering changes in your body. In CNS based anxiety disorders, if you impact the thoughts/behaviors/chemistry in your brain ( with therapy, drugs or some combination) you can calm the trigger of the anxiety and the body reactions fade.  If you take CNS drugs for ANS anxiety, it might dull or mask the CNS reactions to anxiety, but your hormones are still fluctuating and your body is still attempting to prepare for a fight or flight situation.  In some cases, the masking of the CNS response to the body’s hormones may act as a negative feedback,causing the body to secrete even more anxiety inducing hormones in an attempt to “wake -up” the brain- thus increasing anxiety, rather than decreasing it.

If your Axiety is ANS Anxiety, the only thing that is really going to make it go away is to treat the dysautonomia that is the real root cause.  Because there are many potential causes for dysautonomia, there are also many potential treatments. It is important that you work with your physician and/or medical team to find the balance that works for you.

For some folks ( I am one of these lucky ones), staying in balance is as simple as increasing salt and fluid intake.  For others, it may mean other diet or lifestyle changes and/or medications.

Beta blockers have long been used to treat what is considered the “physical side” of  anxiety ( where the anxiety is still considered a  psychological disorder only), it is proving more and more to be an effective treatment for ANS based anxiety as well as other effects of dysautonomia.

Dysautonomia can have many causes- from genetic Familial Dysautonomia  and other genetic disorders like EDS to other medical problems such as  COPD and severe Asthma. For more information on Dysautonomia beyond the links in this post, there is a list of Dysautonomia organizations whose sites you can peruse.  Most importantly, if you are talking with doctors and/or therapists and struggling for a solution to Anxiety, ask the question – is my Anxiety CNS or ANS- and hopefully this will lead to a successful treatment more quickly.

Step one went a little different ( and hopefully better) than I was expecting. Since I had previously seen a Knee Doctor and he proclaimed that I “Need a New Knee”,  I was going in for my consult with Dr. Hur at Methodist Sports Medicine expecting to talk about and schedule a surgery. However, he is wanting to try a few things first.  Today, we tried a cortisone shot. This blog will become tedious for most folks… but will be record keeping and a means of communication with the Dr. as we move forward on this journey. The new goal is…. how long can we put off the knee replacement?  Although I do not feel like 48 is a spring chicken, it is apparently very young for a knee replacement and we are going to see what delay does for us. 3:00 today- first cortisone injection into the Synovial Capsule. It hurt significantly less than I thought it would– but that is because it is still under local anesthetic, I am told. Right now, a few hours later, it is feeling swollen, a bit stiff when I try to bend it and when I stand for a while, I get slight burning sensations. The burning means the local is probably wearing off and I a feeling the burn of the cortisone.  No way to predict how much this will help or how long it will last, but hope to find out.  My goal is to be able to not need my OA Brace unless I am putting the knee under duress…  So I am walking about the house without my brace for now.   The whole thing is complicated by trochanteric bursitis in my right hip… so tonight, I am intending to attempt to find a comfortable position, rest the hip and chill on tramadol.  This means I will not be stress testing the knee tonight. 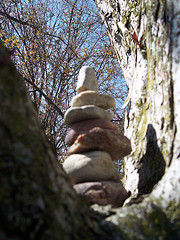 Two years ago at this time, we had not yet figured out that there were lurking genes for wonky connective tissue in my DNA that could cause debilitating levels of pain when untreated. Everyone was assuming that I was either dying or crazy and I got a preview of what a body feels like at 117 after a hard life. Anti-inflammatories, and careful regular exercise got my pain levels back down to a steady 4 or 5.
Now, I have been back to work for 15 months, work long crazy hours and am helping to build a business with a multitude of opportunities. I am blessed to not only be working, but to be doing work that creates jobs for other people as well. I still have times of flare ups.. days when the baseline of pain in my body is an 8 and the spikes drive me to tears, but I have an understanding of the causes and at least a plan of attack to cope until it all simmers down again. The same pains that made everyone think I was dying before are survivable now because there is understanding and at least the hope ( I call it an assumption) that it will pass and ease again.

Pains surround us everywhere… in our fiscal choices, our business dealings and our family relationships.. do you understand the causes of your pains ? Is there a plan to mitigate or cope, or will those pains be seen as a reason to lay down, give in and just die? So often, the outcome is a matter of perspective.

Warning: This is a TMI post.
Turn away now if discussions of bodily functions make you a bit squeamish, or you just don’t want to know. 😉

I am currently recovering from the Stomach Flu. It set in early evening on Sunday and by Sunday night, I was full on Puking up my Guts. Not a casual “oh my, I think I may vomit” sort of way, but a deep, wrenching – “god just take me now” can’t stop the dry heaves sort of way.

After 14 hours of that, I can guarantee that there was NOTHING in my stomach or above…

After that, we proceeded to a goodly bit of messy diarrhea. It was NOT the worst that I have had , but it was a solid 3 hours of emptying of the intestines.

And yet, as things settled down, and I managed to keep down some ice chips and 6 saltines, I had yet another Bowel Movement. Of Normal Size.

Now where the frack did that come from?? Side effect of stretchy collagen ( which means stretchy GI track) Apparently I AM actually full of shit on a regular basis, without even knowing….